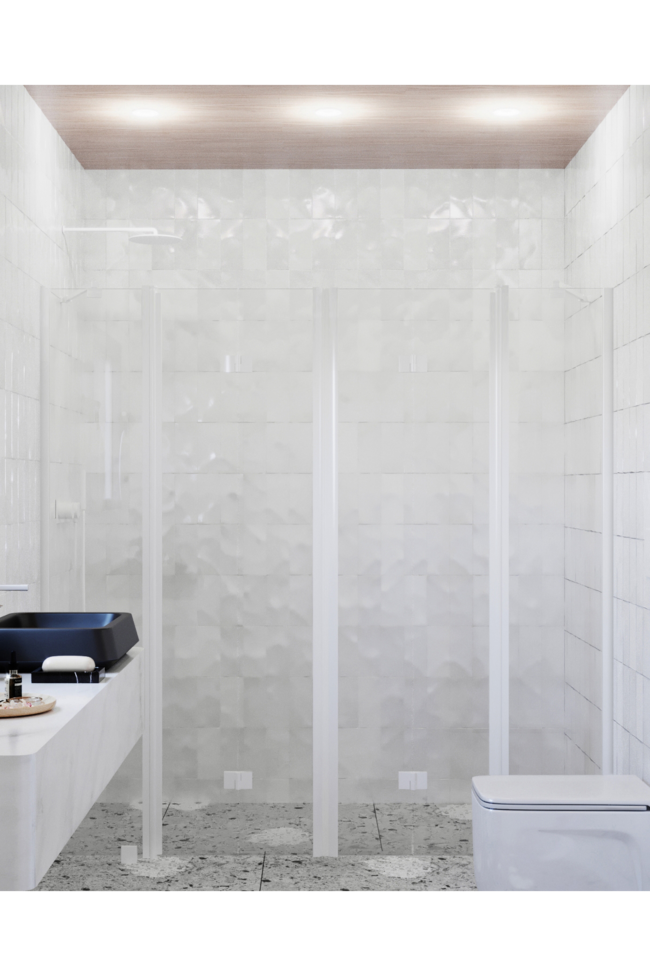 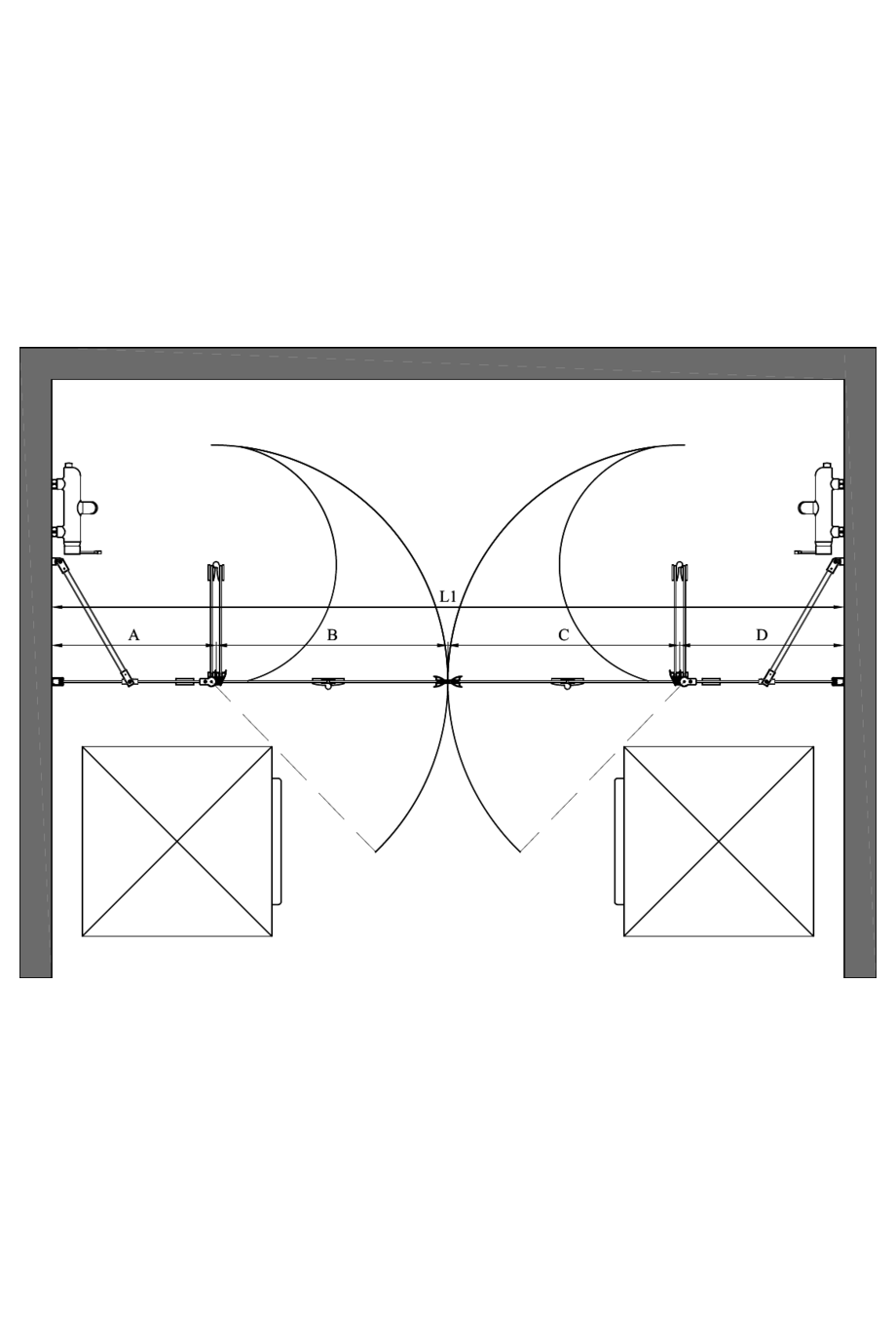 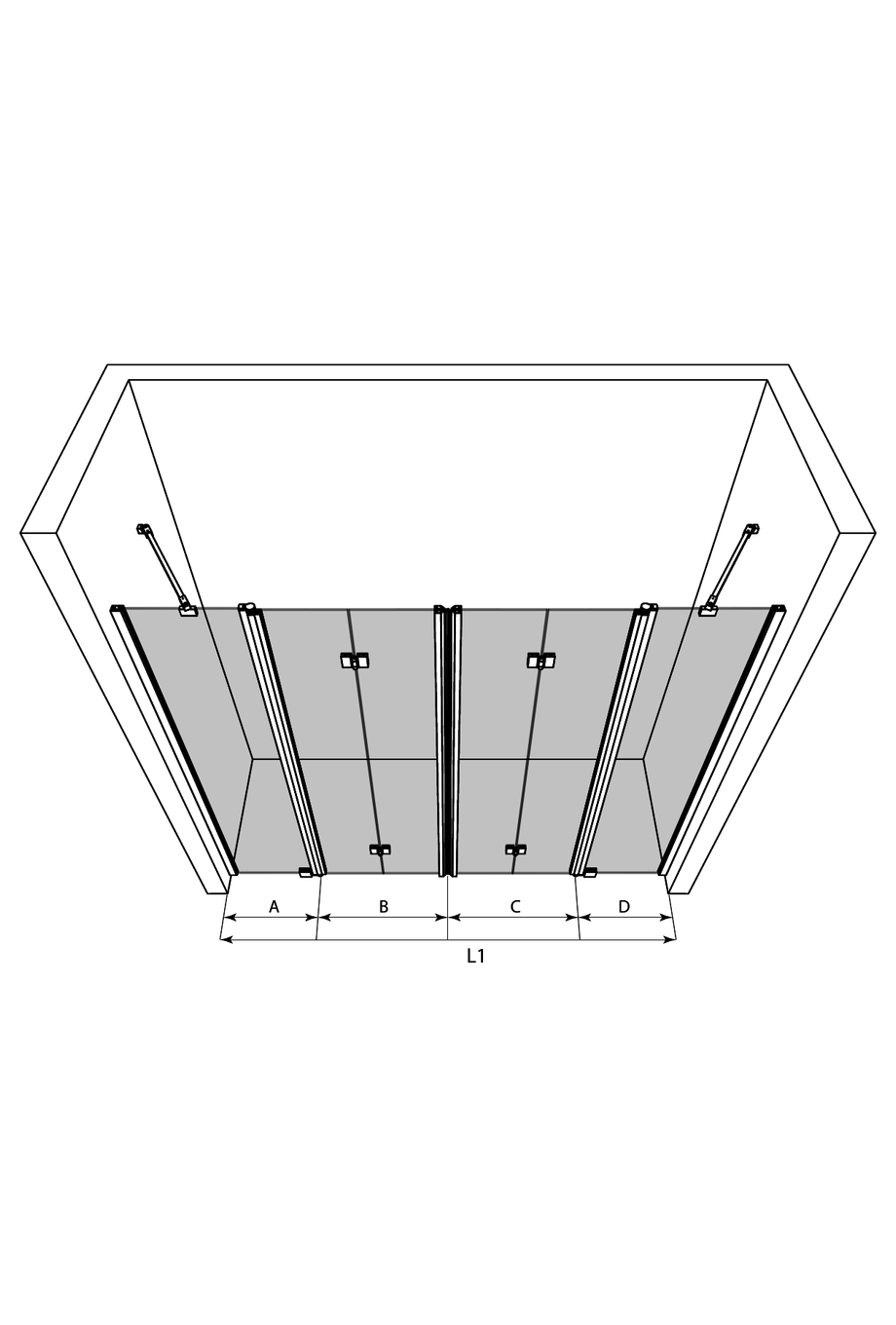 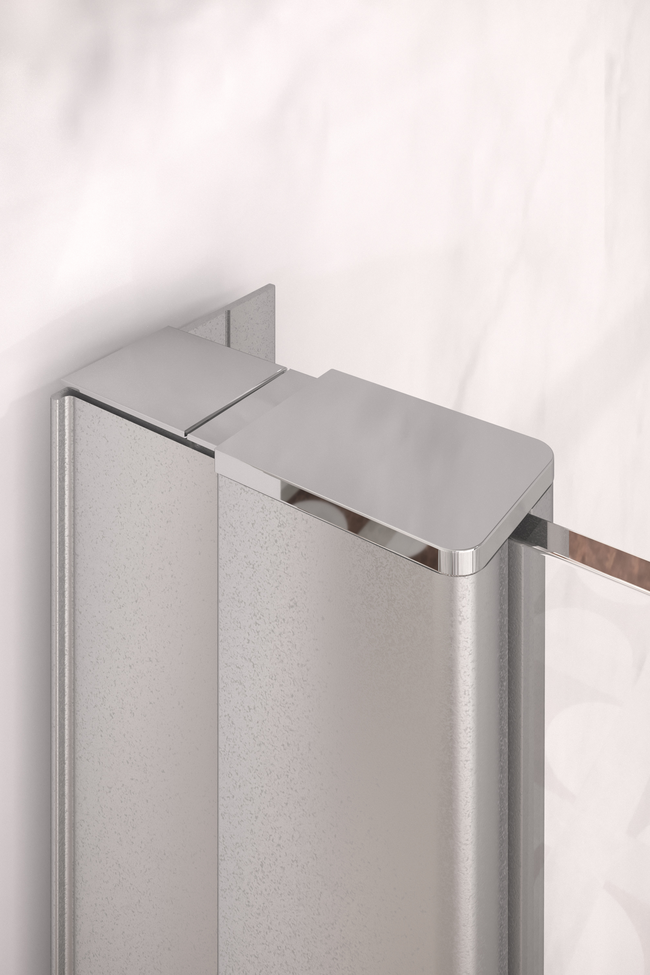 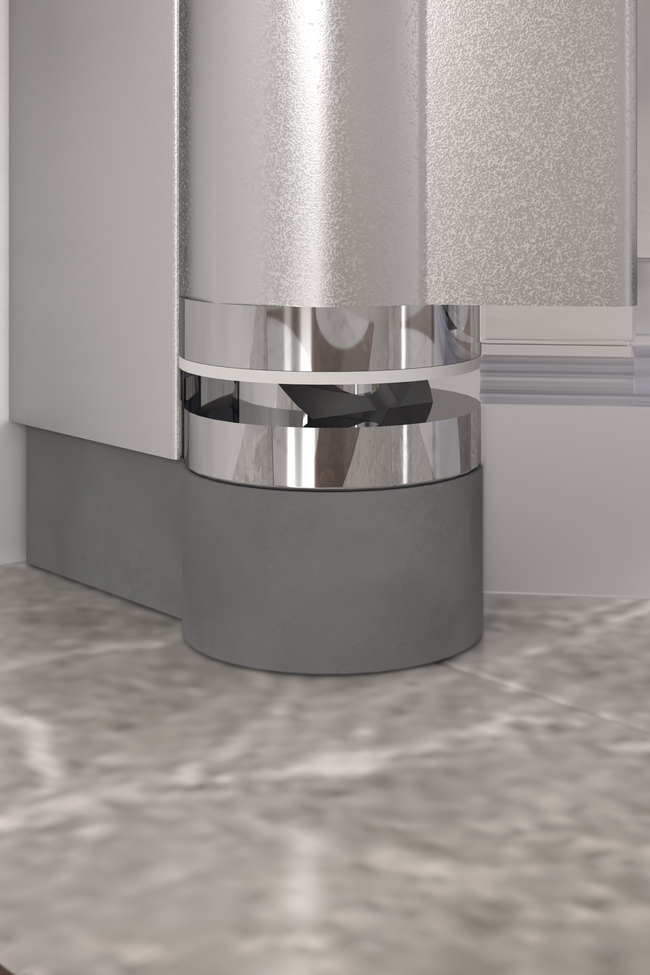 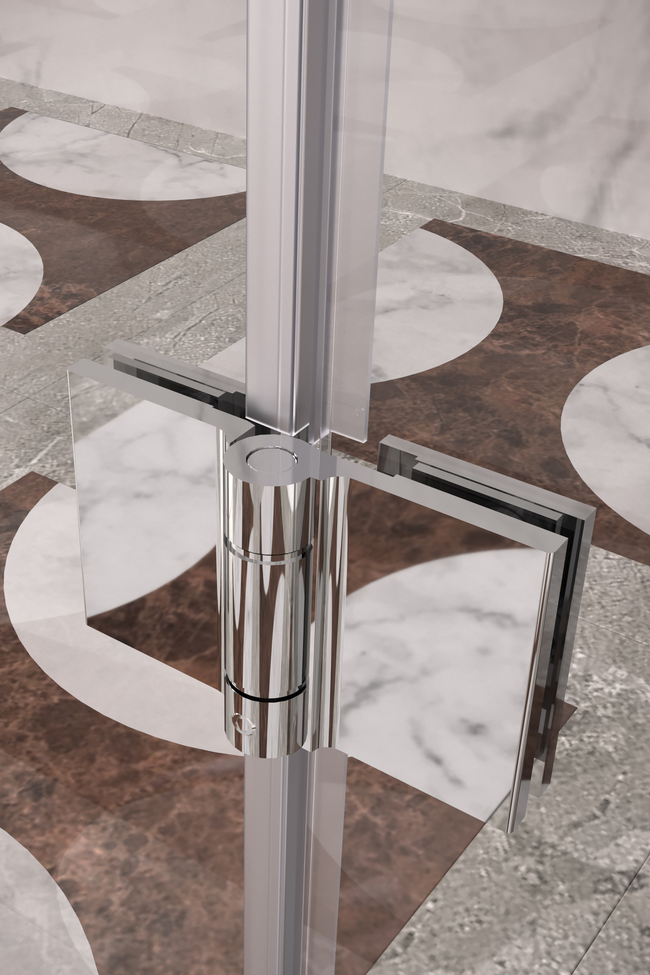 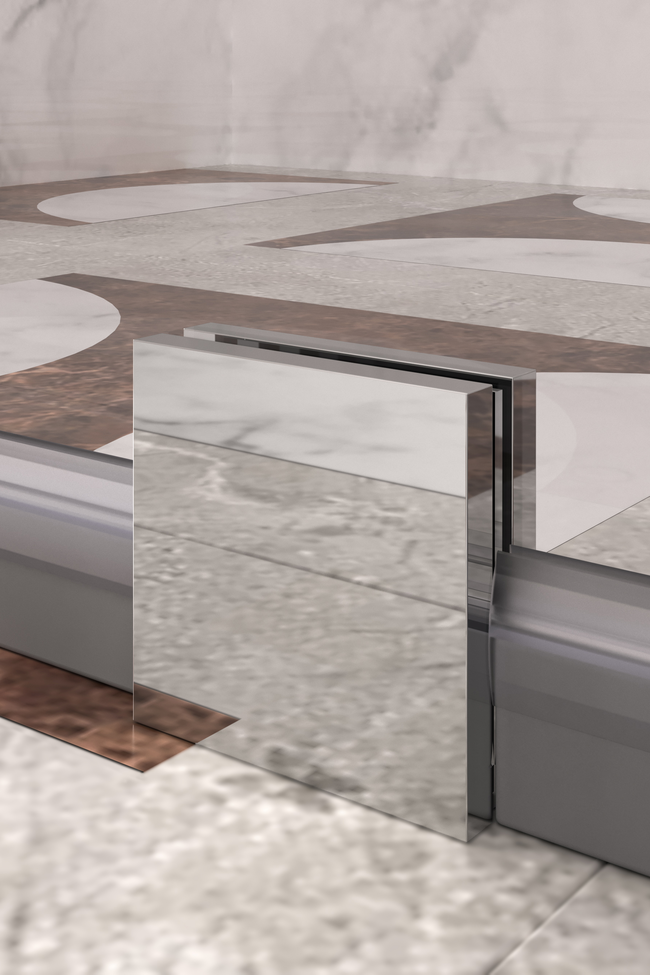 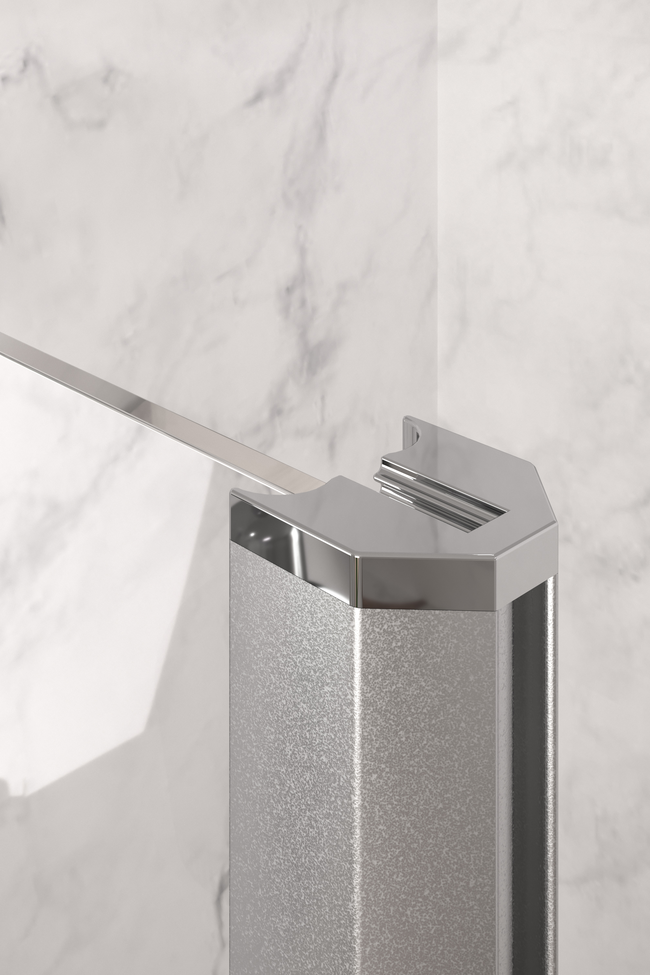 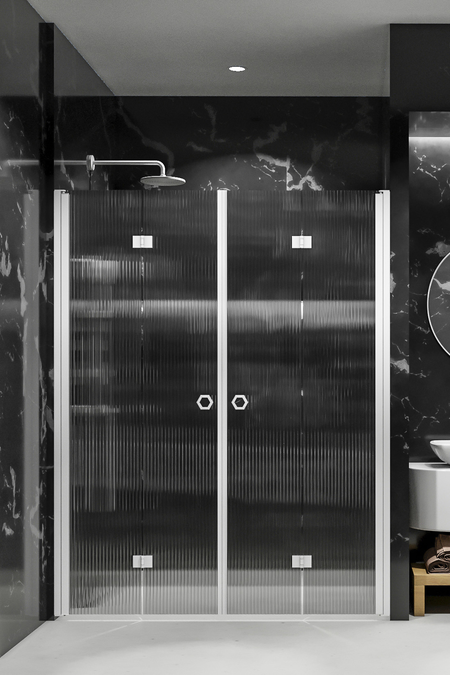 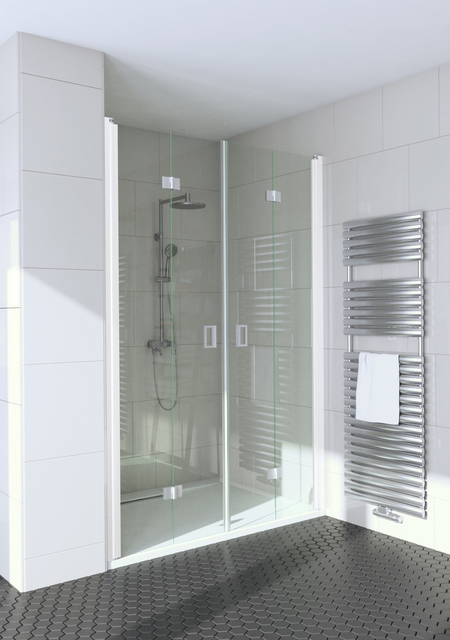 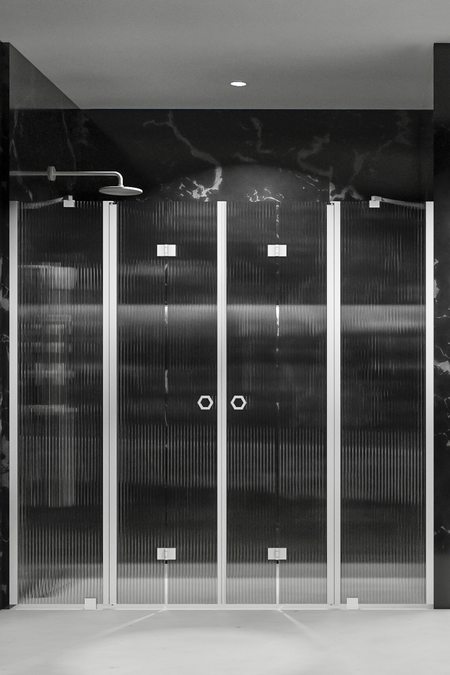 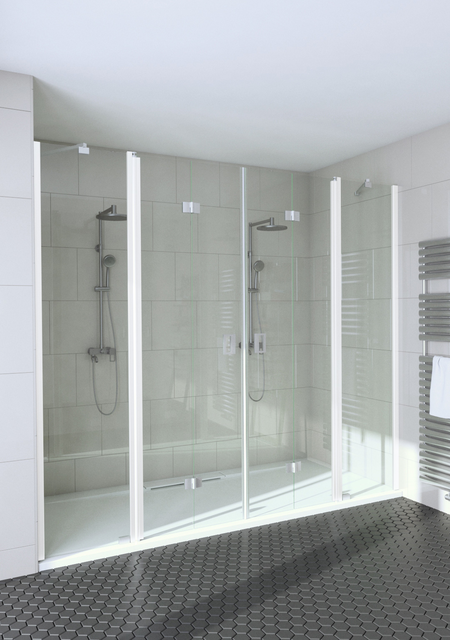 Doors rotate 90 degrees in both directions and are equipped with adjustable centrings. The function of the centring is to return the door to the open and closed positions. positions. In addition, the outermost panels turn in relation to the innermost panels so that the panels of the doors fold against each other to the internal side of the shower area. A pair of magnet handles keeps the doors tightly closed during showering.

Fixed walls are attached from the sides to the walls of the building by means of wall mountedand supported from the top edge by the brace bars installed in the corners as well as from the bottom edge by the fitting glued to the floor. There is a gap of 25 mm between the panel of the fixed walls and the floor. seal (standard part)s may be installed between the panel and the Floor, in order to prevent water from flowing under the panel. Floor seals , which limit the flow of water, can be installed along the bottom edge of the door panel. Installation guide

The profiles mounted to the edges of the panel are manufactured of aluminium. The white (RAL 9016) and black (RAL 9005) surface treatment options are manufactured by powder coating. Grey and bright are anodized coatings. Profiles are sandblasted before anodization, so that the surface is as smooth as possible and there will be no fingerprints. The fittings used in the product, like square foot and brace bars, are chrome plated brass alloy.

The product is manufactured of 6mm thick tempered safety panel (EN 12150). The safety panel can be treated in the factory with Cranith calcification prevention coating. The coating enables the panel to stay clean easier. Clear and smoke are smooth surfaced and transparent panels Chinchilla and satin panel are not fully transparent, details cannot be made out through the panel. Chinchilla is textured on one side and smooth on the other side. One side of the satin panel is etched to acquire a velvety feel and the other side is smooth. When choosing a satin panel product, bear in mind that the etched surface of the panel is sensitive to scratches and stains.

The size of the alcove fitting can be selected from the standard sizes or it can be manufactured using custom dimensions. The wall mounted profiles have the total of 40mm adjustment tolerance The adjustment tolerance can be used for levelling any tilt in the building’s walls as well as for accommodating the alcove fitting into the installation opening. For the purposes of accommodating the fitting into the opening, one or more extension profiles (optional accessory). One extension profile extends the width of the alcove fitting by 34mm and it can be grooved for example for the inlet of the surface water pipes.

The selected combination can be installed into the opening (L1) the width of which is:
- At is narrowest: 1484mm
- At its widest: 1524mm
Dimensions may deviate from the declared values if adjustment tolerance must be used to level the tilt of the building’s walls. Note! The parts of the combination can also be installed in the direction opposite to the direction shown in the layout.:

The product is supplied as standard with a 28mm high floor seal. The optional accessories are a 50mm high floor seal for shower areas where the floor tilting is higher than normal. The length of the floor seal is 1000mm and it is cut to a suitable length on site. The watertight quality of the product can be improved by installing a step profile under the door. The step profile is cut into a suitable length on the side and glued to the floor. The height of a shaped step profile is 10mm and its width is 16mm. An extension step can be placed under the glass clamp to raise it by 10mm.

The selected combination can be installed into the opening (L1) the width of which is:
- At is narrowest: 1484mm
- At its widest: 1524mm
Dimensions may deviate from the declared values if adjustment tolerance must be used to level the tilt of the building’s walls. Note! The parts of the combination can also be installed in the direction opposite to the direction shown in the layout.: